INTERVIEW: VERSHON WANTS TO BE YOUR ‘ONLY ONE’ WITH THE RELEASE OF HIS NEW EP

Rising star Vershon has just dropped his latest EP ‘Only One’. YEEEAAH! Network speaks exclusively to the Jamaican-born artist about working with the FaNaTiX and Plan B, making music during a pandemic and his biggest inspirations.

OK, you’ve released your third single called ‘Stick by Me’. You’ve also worked with Chip who is a major grime rapper in the U.K. on ‘Reality’. That’s a major collaboration when we get to see UK and Caribbean artists come together. How important would you say it is for artists from different, say, nations or countries to be able to come together and collaborate?

Your current single ‘Stick By Me’ was co-written by Plan B who has been a very big inspiration in the UK scene as well with his rapping and his versatility as well, like acting and film directing. It is also amazing how he is still writing music behind the scenes and supporting other artists too. Can you talk to us about how that collaboration came about and what the chemistry was like to bring the song about?

Plan B was in Jamaica in 2019 with the FaNaTiX. They were in Montego Bay and the FaNaTiX asks me to come and make some music with them. So I went. I didn’t know who Plan B was, the FaNaTiX introduced me to him, and I invited him into the sessions. It was a real vibe and energy. It felt like we knew each other a long time, years ago, because we’re both on the same mission. So, yeah, that was just a vibe one, an energy.

OK. Do you think also that it’s important that when artists come together they have genuine, authentic energy? Obviously, sometimes the labels want to bring artists together for business reasons. Do you think there’s a balance for both ways or which one is much more beneficial?

It can be good and it can be bad. Sometimes you hear an artist’s music and you don’t know their personality. So you might like the music and the personality is different. You have artists who are full of themselves. They’re cocky, they ‘boasty’. So when you link up it brings a different energy to the song because you might not like how he comes across. So it can be good and it can be bad. From my experience, I’m a very humble person. So when I met Plan B in Montego Bay I didn’t feel like he is a bigger artist than me. And I didn’t feel like “yo it’s my place you are inna so me are the man” It wasn’t like that. He was like family to me. Like a brother. So, I have to big up Plan B.

We’ve done some research and realised that you started tinkering with music from the early age of nine. Share with us the story of how music was introduced to you.

My mum is a Christian so I used to sing in church and that’s where everything really started. But when I really decided that this is what I want it was about age 14. So you know you have the sports day at school, I used to perform and teachers would encourage and say “you sound good”, “you have the voice to sing”. So that’s when I decided to just make this a career.

From your early years, how did you decide if you were going to go into dancehall or soul or gospel?

I’m from the Ghetto South. My music was kind of more violent, more aggressive stuff. Then when I met up with Birch he was like “Yo. Vershon you sound good. You have the voice to sing. I don’t think this is the type of music that you’re supposed to be doing. Do some music for the ladies. Do songs so the people can understand you and feel your pain”. So that’s when I really changed the style of music.

Your EP ‘Only One’ drops today. What made you think you were ready to put out an EP and what was the process behind it as well?

This is not my first EP. I did an EP independently in 2017 called One More Day. So now, working with FaNaTiX. It’s new. Signing with Parlepone is also new because I’ve never signed a record deal. So that’s why I decided why not just put out an EP instead of one song so it’s a body of music.

There’s no boundary with music. I can’t tell you what will work and what’s not going to work. So it is a gamble. We just have to take the chance and hopefully, it works out in our good favour.

So we’ve had a sneak preview of your new EP. There’s a lot of great vibes in there. And you definitely have got the love for the ladies. How much does your life inspire the music that you’ve written or do you create storylines and inspire people in that way?

Some of my music is personal. While some are based on my friends’ experiences or stuff that’s on social media, everyday topics.

A scene from the ‘Stick By Me’ video

So once the ‘Only One’ EP is released. How do you hope people will receive it and your contribution to music?

I hope that it will be well received locally, internationally, all over the world. That’s really the mission. So I am very optimistic about this journey.

Do you have any plans over the next few months after the EP drops to bring more exposure to your music and being able to reach out to your fans?

To be honest, the fact that Covid is still here. I really can’t tell you much because maybe next month there could be a new strain and we lockdown for another year or so. For now, I’m just focussing on the EP.

Who are the rising artists catching your eye, you know, really great to listen to and people should give them attention? Who inspires you at the moment?

Who would you love to collaborate with on your next project?

If the music sounds good. If it feels good. Then I am ready to work. There’s no one specific because sometimes artists mess up a lot of time thinking that doing a song with a big artist is going to make it a hit. But sometimes you can do music with a no-name artist and it’s a hit. I’m open for music. I’m not looking for anybody specific as long as it makes sense.

I would say just do music, stay focused and stay positive. Things might not happen fast now because of the condition of the world. But things will happen as long as you stay progressive and conscious about what you are doing. Just keep focussed. 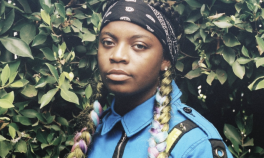