Stormzy is the first artist to sign to 0207 Def Jam which was recently launched by co-presidents Alex and Alec Boateng, who are Ghanaian-British twins. The grime artist’s previous studio album was released through Merky and Atlantic Records UK.

The news was confirmed earlier today, with Universal Music describing Stormzy as a “once in a generation artist” on Twitter.

Alec Boateng had previously played a vital role in signing Stormzy and his label, Merky, to Atlantic Records and also played a huge role in the campaign for ‘Heavy is the Head’ Stormzy 2019 album.

Stormzy is a three-time Brit Award winner, including Best Male Artist I 2018 and 2020 and Best Album in 2018. He’s had three U.K. No.1 singles and has won multiple BET Awards and an MTV EMA. 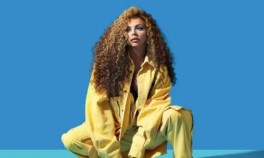 JESY NELSON COVERS THE GUARDIAN, GETS CANDID ABOUT HER STRUGGLE WITH ONLINE HATE, AND MORE