Megan Thee Stallion is unstoppable this year with a remix on her ‘Savage’ with Queen B, her feature on Cardi B’s ‘WAP’ which has been breaking all grounds and setting new records, to pulling out of being a victim in a shooting incident, and all set to release a clothing line with Fashion Nova, the list goes on.

But this time her new win is with her latest single ‘Don’t stop,’ which she featured Young Thug. After been released on October 2nd, along with an ‘Alice in Wonderland’ themed music video directed by Colin Tilley debuted at #30 on this week’s Hot 100 and ranked as the highest Hot 100 debut among all-female acts this week. This also comes as her seventh overall top 40 hit on that tally-fifth this year alone. 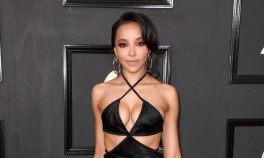 TINASHE SHARES ON HER JOURNEY TO COMPLETING NEW ALBUM ‘333’

CHRISSY TEIGEN RETURNS TO TWITTER AFTER THREE WEEKS IN HIATUS