To conclude the splendid celebrations to Kim’s 40th birthday after the intimate trip with family and friends on a private island, Kanye gifts Kim a very ‘Creepy’ hologram of her dead father.

For my birthday, Kanye got me the most thoughtful gift of a lifetime. A special surprise from heaven. A hologram of my dad. ✨🤍 It is so lifelike! We watched it over and over, filled with emotion. pic.twitter.com/jD6pHo17KC

Robert Kardashian, the father of Kim Kardashian who passed away from esophageal cancer in July of 2003 at age 59, was brought to life in the unconventional gift Ye gave to Kim. The hologram which was so life-like, carried a message, presumably one that a proud father will have for his beloved daughter.

The two and a half long message said: ‘Happy Birthday Kimberly,’ greeted the hologram. ‘Look at you! You’re 40 and all grown up. You look beautiful just like when you were a little girl.

“I watch over you and your sisters and brother and the kids everyday. Sometimes I drop hints that I’m around,’ noted hologram Robert, who made reference to something the Kardashians refer to as a ‘big peefee’.”

“Remember when I would drive you to school in my tiny Mercedes everyday and we would listen to this song together,’ recalled Robert, as he began to jive to the beat of the 1961 hit Who Put The Bomp by Barry Mann.

I am so proud of the woman you have become, Kimberly, and all that you’ve accomplished. All of your hard work, all of the businesses you have built are incredible.

But most impressive is your commitment to become a lawyer and carry on my legacy,’ noted Robert with a smile and a tender hand on his heart. ‘It’s a long and a hard road, but it’s worth it. And I am with you every step of the way.”

Referring to Kim’s latest endeavour to become a lawyer like her dad. Robert Kardashian prior to his passing was once a successful lawyer, well known as part of the ‘Dream team’ that got football star and friend O.J. Simpson acquitted for a double murder in 1995.

Hologram Robert then went on to express his pride over Kim’s dedication to her ‘roots’ and how much supports she has shown over the years for the country.

But the most important thing that I have witnessed is watching you grow your family. You married the most, most, most, most genius man in the whole world, Kanye West.

Keep doing what you’re doing, Kimberly. You are a beautiful soul. Know that I am very proud of you and I am always with you.”

He then concluded to assure his family that he had ‘built a firewall around them’, and said: “I love you, Kimberly. Tell Kourtney, Khloe, and Rob that I love them and that I miss you all. Don’t forget to say your prayers,”

After Kim Kardashian shared the touching video of her dad on social media, critics began a breakdown of why the gift is wrong and ‘creepy’ with fans also stating how thoughtful of a gift that was, especially as the whole Kardashian family cherished the gift and admitted to having watched it many times with such immense emotions.

I can’t even describe what this meant to me and my sisters, my brother, my mom and closest friends to experience together. Thank you so much Kanye for this memory that will last a lifetime ✨ Here’s a more close up view to see the incredible detail. pic.twitter.com/XpxmuHRNok

As much as I disrespect your decision to hold a birthday party when you could have donated some of that to medical workers PPE, I know how much this meant to you and I would move heaven and earth and pay anything to see just a hologram of my dad.

This was an odd but sweet sentiment until the hologram said “you have married the most, most, most, most, MOST genius man in the whole entire world…” and then it just lost me. Kanye’s using family to fulfill his narcissistic impulses now? Yikes

he just threw a little fun joke in there, im pretty sure his wife thinks very highly of him as she has said before in public.. chill out and let them enjoy their moment man

What are your thoughts on Kanye’s gift?

LIL NAS X SHARES ABOUT NOT FEELING RESPECTED IN HIP-HOP 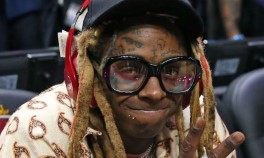