Fans have been speculating and asking anxiously what to expect. So far, nothing new has been disclosed but a daily countdown is ongoing on Justin’s Twitter account.

As it stands now, many rumours and speculations are floating on the internet as to what fans can expect. Some strongly believe its new music since Bieber’s follow up tweets have a link to JBsoon.com which is supposedly a preorder site.

Other speculations lead to an earlier video posted by Scooter which saw Bieber having a session with Shawn Mendes and Tori Kelly in a studio. 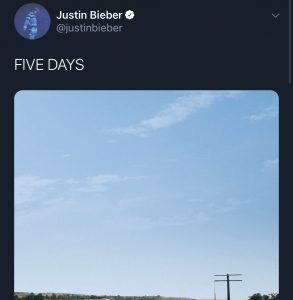 Could this be the collaboration of the year and more importantly, the new music to expect this Friday?