After the near-death experience with a near-fatal overdose on 25th Dec 2019, James decided it was time for a change in his life and got himself enrolled in a rehab center.

A former TOWIE star and friend Mark Wright booked James into a rehab center after the scary experience which saw James admit he was ready to receive treatment.

Fast-forward to the here and now, James has fought a good fight with his addiction and is now celebrating the huge milestone, sharing a picture of two rings which had the number one and the words: ‘We’re here and we’re free’, while the other one said: ‘Hope, faith, courage’. The caption also read: ‘1 year clean and sober. A huge milestone I’m extremely proud of’. 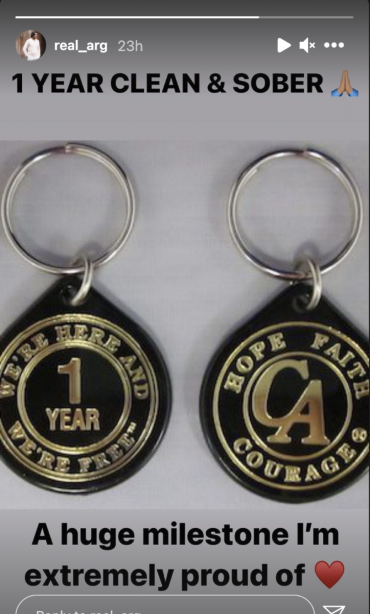 During an interview on Loose Women last year, James emotionally spoke about his past challenges and broke down when his mum discussed his past battles with addiction.

James said: ‘I was the biggest I’d ever been, 23 and a half stone, I hated everything about myself, all-time low.
‘I remember around that period, I was using drugs for like two or three days straight in my house, I had locked myself in and it was pitch black in the house.’

Being so brave to speak very openly about his addiction and challenges, James said: ‘I feel this time, after going to Thailand to work on myself for a few months, this time I really believe in my heart of hearts, this is the time I’m going to stay clean and sober forever.

‘I believe that I felt I could discuss it and be accountable. I felt it was worst kept secret, stories throughout the years… during breaks for TOWIE it was known but I never spoke about it.’

Acknowledging the difficulty in getting over his addiction, James shared that he feels a sense of relief as a ‘big weight’ has been lifted off his shoulders and now has a ‘responsibility’ to help others in a similar situation.

James’ mum was sure to let her son know how much she is proud of his ability to fight and stay sober.

She said: ‘Absolutely devastating. I’ve never gone public talking about my son’s addiction it’s a really big thing. I support him, so proud, nine months clean and sober we have to rejoice in this.

‘I want to help other mothers with children going through this – it’s [the] worst nightmare a mother could face.’

Congratulations to James Argent on his one year anniversary of being ‘clean and sober’.

THE ‘WHITNEY HOUSTON & BOBBI KRISTINA: DIDN’T WE ALMOST HAVE IT ALL’ DOCUMENTARY OFFICIAL TRAILER OUT NOW

MULATTO RESPONDS TO ACCUSATION SHE DENIED THE EXISTENCE OF COLORISM.