During a long interview with VLADTV recently, the ‘Ain’t Nobody’ singer goes hard on the current generation of singers. When she was asked by Luenell about who she would consider doing a collaboration with, she insinuated there ain’t nobody she would have a duet with.

At the mention of Ariana Grande in the midst of their conversation, Chaka replied saying ‘f*ck her’ to the surprise of all, as they both featured on last years ‘Charlie Angels’ reboot soundtrack.

Later in the interview, she was persistent on her stand saying ‘I’m not doing no song with no heifer.’ However, upon further questioning, she did reveal she had some male artists in mind that she would like to work with, namely Rahsaan Patterson and Anderson Paak.

The topic of a Las Vegas residency was mentioned, to which she expressed her thoughts on potentially doing so but said any sponsors coming on board would have to “dig deep in their pockets” to secure her talents.

Watch the entire interview below, as she goes in deep on many topics relating to music. 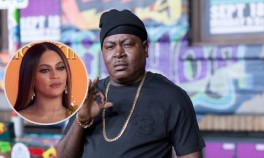