The Recording Industry of America (RIAA) has announced updates regarding the certification ‘Liar’ and ‘My Oh My’ featuring DaBaby.

RIAA has confirmed that both tracks have passed the certification thresholds. ‘Liar’ is now Platinum, with a sales equivalence of 1 million units in the United States. While ‘My Oh My’ is double Platinum with a mark of 2 million units sold in the States.

With ‘Liar’s’ recent update, Camila’s collected 8 songs that have been certified Platinum or higher since the start of her solo career just 3 years ago.

But her highest achievement with the RIAA remains her breakout hit, ‘Havana,’ as it currently hovers near the Diamond status.

MARIAH CAREY BEING SUED FOR $1.25 MILLION BY HER SISTER ALLISON CAREY 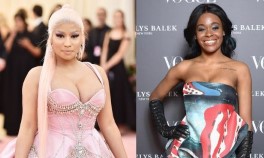