Nigerians were still protesting after the government had declared the 24-hour curfew which started from 4 pm on Tuesday.

Currently, at the time of the report there 12 people killed and ordered wounded from the opened fire by the soldiers.

Following this development, several celebrities including Rihanna, Nicki Minaj, Idris Elba and others have joined in to voice out the call for the end of violence.

#EndSARS We need everyone's voice to amplify what is going on as we speak!! The world is watching https://t.co/Zk4Dg27IrU

President @muhammadubuhari, please stop the violence that is killing the Bright and promising future of Nigeria. Our youths and young generation are our leaders of the future. Show the world who are watching…BE THE HEAD OF STATE THAT SETS AN EXAMPLE! #STOP POLICE BRUTALITY!! # STOP THE SPECIAL ANIT ROBBERY SQUAD #ENDSARSNOW 💔🇳🇬🦅 @arisenewsofficial @cnnafrica @bbcnews @skynews

Calling on Africans to unite in protest against what is happening on Nigerian soil. The leadership of other African nations need to make their voices heard for the protesters of SARS. From one leader to another, show them some perspective on the way they are handling the youth, IT IS WRONG and should be met with HEAVY criticism and positioning. AFRICA should not turn its back on this situation, the WORLD LEADERSHIP should not turn its back on this situation. Use your power and reach to influence the Nigerian government to govern this situation better and not spill blood.🇳🇬

As a Big supporter of Nigeria one of the most creative / cultural places in the world! I send my love and prayers out to my brothers and sisters at this sad time 🙏🏽🇳🇬 Please be safe🙏🏽 I love you 💚. #endsars This must Stop ASAP!!!!!

Standing with & praying for the brave young people of Nigeria who are on the front lines of this senseless violence. Your voice is being heard. 🇳🇬 #EndSARS

Our thoughts and prayers are with Nigeria in these difficult times. 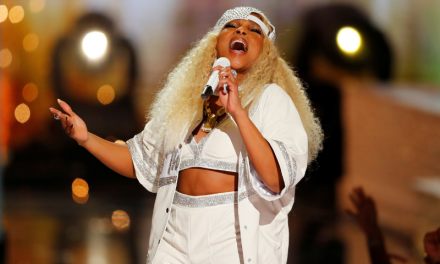 MARY J. BLIGE ADDRESSES NOT GETTING PAID TO PERFORM FOR SUPER BOWL HALFTIME SHOW, SHARES EMINEM’S REACTION TO THE NEWS